Yesterday Google+ got a new outfit and Hangout got a long overdue facelift too. I don't mind the new looks, but my stream is exploding with UI/UX experts (or people thinking they are experts in that field) that keep complaining about the multi column layout or Hangout missing features.

I am no expert on UI/UX at all. Actually I am the exact opposite. I'm a die-hard-use-shell-for-everything guy. I don't understand why white and smokewhite make a difference. I don't consider adding shadows if we are not rendering something in a 3d world. I appreciate a good UI when I see one, but I could never make one.

What I can do, however, is configure my system.

If i want to show my stream the way it used to be, I press the right button. Is that really so hard?
The only valid complain that I would accept is the fact that the button hides in the More menu. Why on earth is it not in one of the many settings?

So apparently Google does not use XMPP anymore. I have not checked if that is true but judging from the features the new Hangouts has, it probably is. It might also be that the new Hangouts App is just a lot smarter than the old Talk client. I just did a quick test and sent an Image from the new Hangouts app to somebody that still uses the old Google Talk client. She just gets a link to a g+ picture.

So what about configuration?

In my opinion, Google does a really bad job at putting settings where they should be - and Hangouts is no exception. 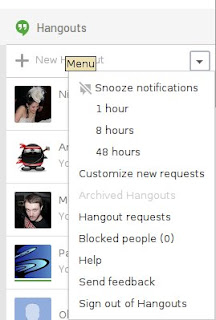 Nobody in his right mind would expect the settings to hide behind that tiny drop down icon.

Sidenote: Why do I still have the Google+ Messenger App? I thought we would get rid of this thing now?